The History of Television: How Far We Have Come

Television. Is there any 20th century invention which has revolutionised peoples home lives so much? The Broadcaster Audience Research Boards (BARB) show that around 96% of homes in the UK have at least one television set, and that number is around 80% when you include the whole world. It’s a piece of technology that has touched everyone in some way, even some of the generations biggest and brightest talents have had their say on the Television:

TV exposes people to news, to information, to knowledge, to entertainment. How is it bad? – Tom Clancy

I hate television. I hate it as much as peanuts. But I can’t stop eating peanuts – Orson Welles

There aren’t many topics where you can get the opinions of a legendary action author, an iconic actor, and a rotund, beer drinking, yellow skinned nuclear technician, but TV is one of them.

Part of the sustained popularity of the device is the ability it has had to evolve within itself so many times and continue to make that corner of the living room or that space on the wall it’s own, and when you think about how far things have developed in just a single generation, it’s pretty staggering. The team here at TV Aerials are a nostalgic bunch, having installed TV aerials for years across all kinds of technologies (some of them may even be old enough to remember black and white) and so we have decided to take a stroll down memory lane and look at how far television and broadcast systems have come over the years.

Where else to start other than the beginning of commercial television, in plain old no frills black and white? Below you can behold the glory of the RCA 630-TS, the worlds first mass produced television set, which was on the market for a single year. 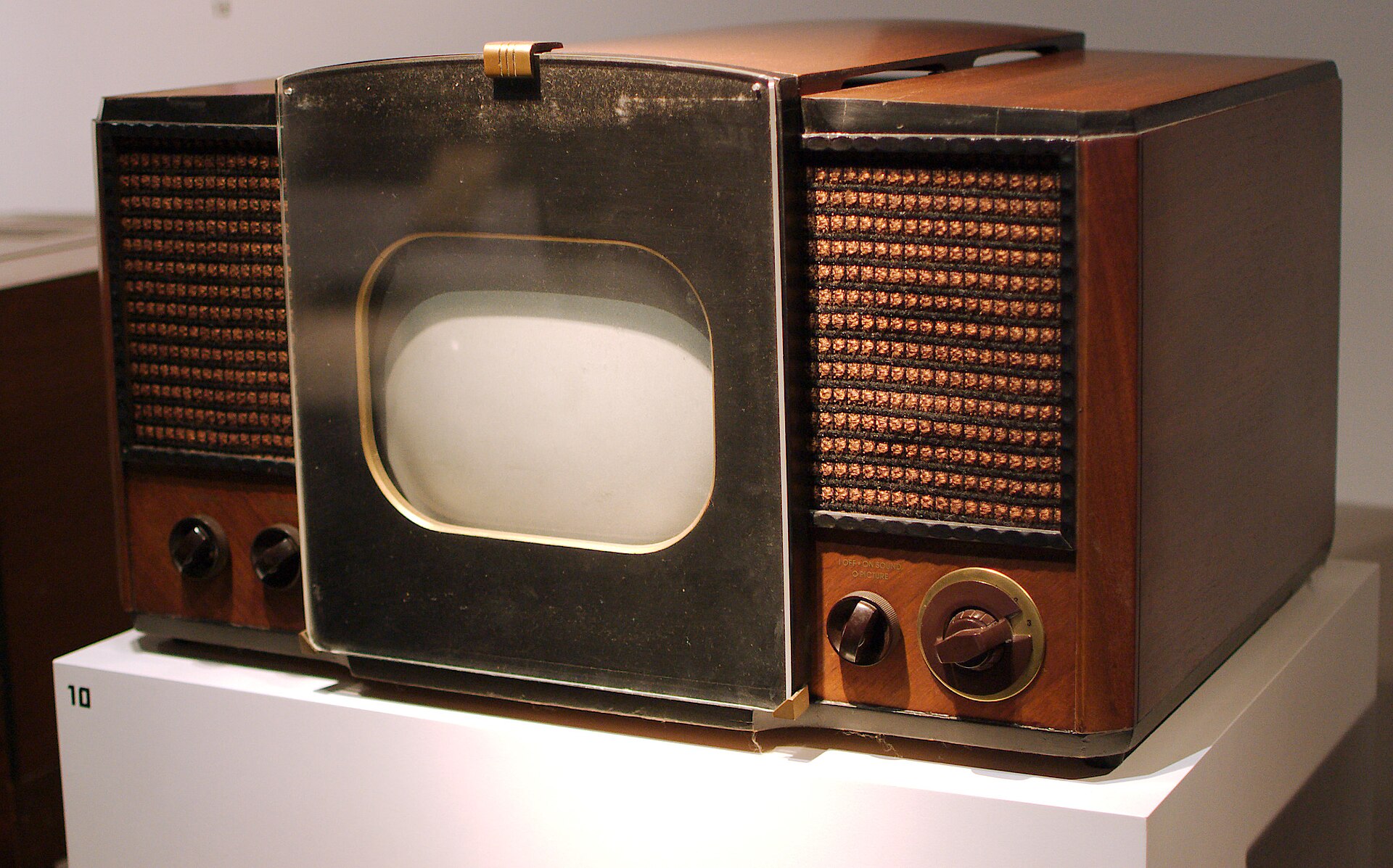 A piece of technological history? Yes. Good for watching snooker? Not so much.

Show this to anyone born in the last 15 years and they may well think that It’s some sort of unholy mishmash of a suitcase and a speaker, but this is what families would gather around in the 1940’s to watch the only channel available. That’s right, one channel.

Naturally, following this came a string of black and white television designs, but in 1954, RCA were at it once again as they released their first commercial colour television. It cost $1000 at the time, which at the time was about the equivalent of $9,000 today, meaning it certainly wasn’t an every man device, and the fact that most network programming was still in black and white made it somewhat frivolous until the mid 1960’s when the colour revolution really took off.  It certainly begun to point the way towards what was to come in the next few decades though, and the iconic design is somewhat synonymous with 1950’s “American dream” style living, making it hard to imagine it without a pipe smoking tie wearing father putting his feet up at the end of a hard days work, whilst a stereotypical housewife gleefully cleans in the background.

Now we fast forward history a few years to the start of the devices which may make you feel all warm and fuzzy inside, or recoil in horror as you remember them from your childhood. We are now in the swinging 60’s and the super seventies, when televisions begun to stop being their own cabinet as well, and took a upon more microwave styling, becoming less costly and more popular as years went on. By this point, families across the UK were sitting down in their masses to catch the early years of classics such as coronation street, and squabbling over whose turn it was to get up and adjust the volume, as the remote control was not yet the common household item it would go on to be in the following decades.

Betty’s fabled hotpot would never have got off the ground without devices like the Bush CTV167.

Enter the 1990’s. The decade of Grunge, Britpop, mobile phones and the famous windows 95/98 operating systems. Televisions popularity continued to explode and iconic programming such as the sitcom Friends only fuelled the fire, and now audiences of millions were gathering around every day to watch the growing number of channels, which expanded from 4 to hundreds with introduction to the market of digital television providers such as sky. Battling with aerials, holding them out of windows and balancing them on your head to try and catch a glimpse of the FA cup final was becoming a less and less common issue, and simple scart plugs or even satellite dishes were beaming colourful images onto the typical big backed devices most of us will have owned at some time in their life, like the  Phillips 28ML8805 below, featuring a 28″ screen and built in video player. Spare rooms, attics and garages across the nation are now littered with these once adored models.

This particular model weighs in at just 78lbs, the future is here!

Move on to the late 90’s and the early 2000’s and things take a somewhat different shape, things get much more flat, as LCD & Plasma, flat screen televisions came and revolutionised the market (as with most of the era’s mentioned in this piece, flat screen TV’s actually came about long before, but we’re focusing more on their commercial breakthrough years). LCD televisions use liquid crystals to display their pictures rather than cathode ray tubes of older models, which gave them their three biggest advantages – better picture quality, slicker flat design, and a the ability to be made larger, with many of them reaching up to 50 inches wide. The first commercial models were being sold for around $15000 dollars to begin with, but around 2004 onwards prices began to drop and now you will be hard pressed to find a living room across Mansfield or the UK which doesn’t have a flat screen television sitting in the corner, or thanks to the lighter weight, mounted on a wall.

It’s so thin, how do all the characters fit inside!?

And with that we arrive right around the present day. Televisions have gotten clearer, lighter, larger and flatter, what could seriously happen next? Well, they’ve gotten smarter. The age of the smart tv is here, televisions which are so much more than just televisions. Nowadays you can browse the web, play games and access a wide array of apps from your television, and then use those apps to access special internet only television series’ and so on, amongst a wide array of other amazing features which many never would have even dreamed of when the televisions above were first coming into the field. This is without even mentioning the fact that HD viewing is now the norm, and 3D capabilities mean that, if you’re okay with wearing glasses to watch TV, then your favourite shows can come to live and jump out of the screen and right into your living room.

Anyone who has seen the movie I, Robot, is rightly worried right now

The question is, what comes next? Televisions have gone from massive chunks with small screens, to slick devices which are pretty much all screen, and viewing has gone from fiddling with terrestrial aerials, to cable, satellite and now servicesing. The future is certain to hold more innovation, slicker models, more applications, and a great harmony between your television, your tablet and your phone, something which holds for a very exciting few years!

The team here at TV Aerials have dealt with a massive array of televisions and transmission devices over their years of experience in tv aerial installation, so if you have any questions or require any services/repairs, regardless of whether it’s with a terrestrial aerial, a satellite dish, digital box or smart tv, please do not hesitate to get in touch with our friendly team today, either by phone on 0800 2100 377 or via our contact page. Additionally, if you have any sweet (or bitter-sweet) memories of televisions gone by, we would love to hear them on our official Twitter page.

COVID-19 Update: We are still open and taking appointments. Our technicians will keep a minimum 2M distance from you and your family.